Does Cloud Broadcasting Fit Your Workflow? If it does, we have the solution 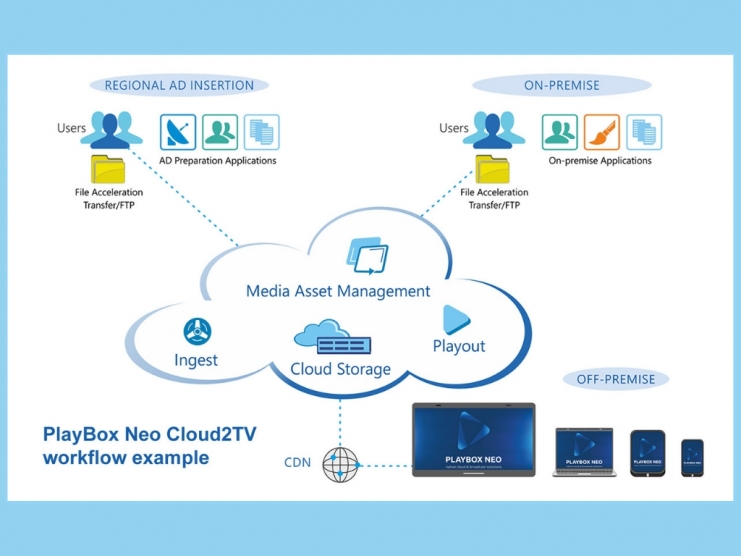 During the 21 years we have been designing, configuring and delivering broadcast playout solutions, it soon became evident that our customers vary greatly in what they want to accomplish and how they hope to achieve it.

Most broadcasters until about 2010 owned and operated an in-house playout system based around an automated video tape library. Disk servers were meanwhile rapidly improving in write/read speed, compactness and affordability. Aware of their potential to make the entire process of playout more efficient, we pioneered a server-based solution that developed into the Neo product range which became a global best-seller.

AirBox Neo accommodates everything needed to store, schedule and deliver an entire day's television output from a 3U high chassis, it inevitably became known as Channel-in-a-Box, joined later by 1U variant which could reasonably be termed Channel-in-a-Smaller-Box. Space-saving and easy to integrate with third-party devices such as routers, AirBox Neo is also easy to maintain: a complete backup system with automatic switchover can be added simply by adding an extra unit.

IP-based networking allows PlayBox Neo to be operated easily from any location, typically in a playout suite 20 metres or so away from the central apparatus room. Programs, promos and commercials are similarly networked from the ingest or scheduling desks to the master playout server. This same flexibility also frees channel managers to delegate all their playout resources to an offsite service provider regardless of distance. COTS-based equipment in general requires relatively little maintenance so a single engineer at a third-party playout facility can supervise multiple channels more cost-effectively than a channel-specific technician who is typically multitasking across other management or studio-related roles.

Cloud2TV – Channel Management in the Cloud

Introduced in 2019, Cloud2TV comprises a group of applications which can be used individually or in close co-ordination with the others to support the workflow of an entire TV channel. Specific Cloud2TV applications are assigned to content ingest, graphic editing, media browsing with metadata handling and clip trimming, quality control and verification, transcoding, playlist management and audit logging.

Cloud2TV is available in three forms

It is fully compatible with existing PlayBox Neo solutions and can be used to extend their capabilities and functionality. The only hardware an operator requires is an internet-linked desktop or mobile computer. Control is via an intuitive web-based interface with administrator-adjustable rights assignment, TV channel management, action-logging and notifications.

Akili Networks, based in Nairobi, Kenya and New York recently chose Cloud2TV as the content management, channel branding and playout core of the first and only free-to-air Kenyan children's television channel. Akili Kids! broadcasts a mix of programs designed to inspire and educate the country's school-age and pre-school generations. Key requirements included ease of operation for non-broadcast personnel operating the schedule plus the highest possible OTT signal quality.

Akili Networks' CEO Jeff Schon: "We are working with major international creators and distributors to program a channel that’s a safe, engaging and educational destination for kids. After just five months during the day-time Akili Kids! has become the second-most watched channel in Kenya, reaching over 9.5 million viewers per week. We also have a terrific team of Kenyan creators and producers. Our goal is for 40% of the channel's programming to be produced in Kenya within the next 36 months. PlayBox Neo partnered with us for over two years as we progressed from initial planning through to the actual build, including flying an engineer, on one of the last flights out to Kenya, to perform the on-site installation and configuration.”

Akili Networks' President, Jesse Soleil: "The actual launch took place on March 31st in the midst of the coronavirus pandemic. Like much of the world, Kenya recommended most of its school-age population to study at home for safety. The PlayBox Neo Cloud2TV model for virtualized global master control and operations enabled us to launch and operate efficiently in this difficult environment. We certainly did not anticipate the pandemic, but the fact that we could bring Akili Kids! TV on air in the middle of it proved beyond all question the robustness of browser-based remote systems management. Program uploads and master control monitoring were all performed virtually from either our New York or Nairobi offices, and Cloud2TV helped us manage our channel even when our core staff was working safely from home."

Akili Networks' CTO Vinnie Grosso: “Besides being best in class, Cloud2TV was the logical choice because it allowed us to locate a server with full system redundancy at a typical data center in Kenya. The PlayBox Neo broadcast system is remotely operated from our laptops using web-based services and delivers superior on-air video quality over Kenya’s 50 Hz PAL DVB-T2 system. Multi-format video files are uploaded from both Nairobi and New York, then ingested and encoded on the server for transmission. A key priority was to ensure a reliable and flexible workflow for all of our staff. We create each day's playout log by dragging and dropping video files into the PlayBox Neo browser-based interface. Cloud2TV’s automation allows us to set up playlists weeks in advance and simplifies major broadcast tasks, freeing up staff for creative activity and also gives us the flexibility to revise the running order of programs and interstitials instantly. We also have the ability to cut to a live video source at any time during the broadcast day by inserting an IP address into the playlist."

One of the first broadcasters to implement a hybrid combination of AirBox Neo servers and Cloud2TV online services was Tring TV which provides high definition programme content in MPEG-4 format to viewers within Albania and globally. The integrated system provides all the resources it needs to deliver a total of 27 television channels.

Tring TV Technical Manager Armand Selimaj: "We have operated very successfully with PlayBox Channel-in-a-Box servers for many years. The AirBox Neo servers are all located at our headquarters in Tirana. Supplementing these with Cloud2TV allows an extremely versatile combination integrating virtual playout plus the best of both worlds in terms of SDI and IP workflow. Cloud2TV gives an easy to use interface which we can access from any location plus 24/7 transmission continuity and highly robust content storage."

AirBox Neo servers and Cloud2TV collectively give Tring TV an operationally efficient and very cost-effective way to extend both the security and the scale of its operations. Additional channels can be added at very short notice using Cloud2TV without adding to the equipment load in a station's onsite technical area.

Artmotion CEO Kushtrim Gojani: "We have invested in 15 complete PlayBox Neo servers and four Cloud2TV nodes. They are very operator-friendly, space-efficient, reliable and easy to maintain. The system we chose comprises one server for each of the 14 channels on our multiplex plus an additional server configured as a manually-switched spare. We have deployed the four Cloud2TV nodes for media asset management, providing fast and secure access to stored promos, commercials and main content. The new installation interfaced easily to our routing, signal processing and studio-to-transmitter link infrastructure. It carries three movie channels, two documentary channels, a music channel, a TV series channel, a children's channel, four sports channels, an information channel and a general channel. DV Group proved an excellent SI partner throughout the system design, configuration, integration and training processes. We also have 24/7 access to the highly experienced support team at PlayBox Neo's headquarters."

"AirBox Neo and Cloud2TV are each very powerful solutions in their own right," adds DV Group general manager Alban Pojani. "Combined into a hybrid as in this case, they offer a very high degree of operational flexibility combined with almost unlimited scalability. The Cloud2TV MAM configuration we have incorporated into the system for Artmotion elevates media asset management to an entirely new level of efficiency and accessibility, and you never run out of space!"

Summary - Secure IP-based System Control is no Longer a Luxury

Media playout is definitely not a case of one-size-fits-all nor will it ever be. Evolving standards such as HDR and 8K will maintain the industry's forward momentum as television viewing continues to increase in popularity. Operational flexibility will gain greater importance given the lessons learnt, and still being learnt, from the Covid-19 pandemic. Secure IP-based system operation has progressed from being a desirable to an essential feature allowing TV channel managers to conduct every aspect of their day-to-day business when and where works best for them.