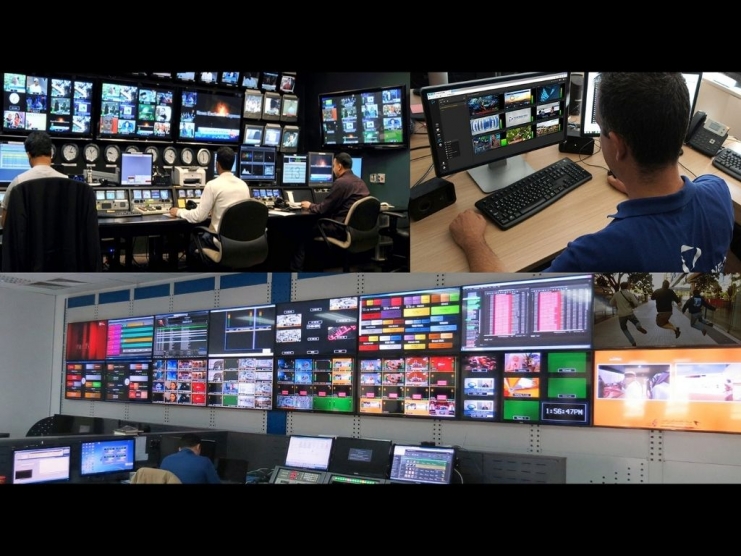 Commemorating United Nations' recent annual World Television Day, PlayBox Neo reports an ongoing increase in global demand for broadcast channels, both online and on-air. “Mobile viewing devices have become very popular over the years but the number of households with television sets continues to increase around the world,” says PlayBox Neo CEO Pavlin Rahnev. “Broadcast media have played a valuable role in the fight against the coronavirus pandemic by providing information and diversionary entertainment. Electronic connectivity throughout much of the developed world allowed many people to work from home, not least our own customers who were able to make full use of secure IP remote control to operate their PlayBox Neo broadcast production, scheduling and playout systems from any internet-connected PC.”

Marking its own 21st anniversary, PlayBox Neo announced a major addition to its product line with the introduction of Capture Suite, an ingest solution designed to increase the efficiency of television networks, post-production facilities and playout centers. Easy to integrate into any broadcast media environment, Capture Suite employs a client-server architecture which can be scaled to accommodate a practically unlimited number of channels. All necessary operations needed to control multiple ingest channels, and multiple servers can be performed quickly via a standard web browser.

Refinements to the established AirBox Neo playout server during 2020 included SRT output support, allowing secure high quality streaming of content via the public internet. New Caller, Listener and Rendezvous modes support connection to the AirBox Neo playout server from more than one location, typically from main and backup locations. 128/256 bit AES encryption can be activated for content protection. An operator may also now generate and send a dedicated password which can only be decoded at the receiver. Also new for AirBox Neo is a web-based multiviewer with a built-in resource monitor. The multiviewer accepts UHD/HD/SD sources and provides support for AJA, BMD and NDI protocols.

Demand for PlayBox Neo systems remained strong throughout the year, notably in the USA. Akili Networks, based in Nairobi, Kenya and New York, chose Cloud2TV as the content management, channel branding and playout core of the first and only free-to-air Kenyan children's television channel. Akili Networks' president, Jesse Soleil:  “The actual launch took place on March 31st in the midst of the coronavirus pandemic. The PlayBox Neo Cloud2TV model for virtualized global master control and operations enabled us to launch and operate efficiently in this difficult environment. We certainly did not anticipate the pandemic but the fact that we could bring Akili Kids! TV on air in the middle of it proved beyond all question the robustness of browser-based remote systems management. Program uploads and master control monitoring were all performed virtually from either our New York or Nairobi offices, and Cloud2TV helped us manage our channel even when our core staff was working safely from home.”

A large-scale playout system upgrade was completed for the West Palm Beach, FL, headquarters of Olympusat. This included the enhancement of 26 servers to the latest-generation software: “We invested in PlayBox Neo Channel-in-a-Box two years ago with an installation at our engineering center in Culver City, California, and we are very pleased with it,” said Olympusat Operations Manager Michael Kohl. “Van Duke and his colleagues at PlayBox Neo worked closely with us during the original install to integrate our existing ad sales management tools. Upgrading to Neo-19 software makes our workflow even more efficient. The PlayBox Neo team has added extra engineering features including support for SCTE commands and N+M redundancy.”

SoundView Broadcasting invested in a PlayBox Neo multichannel playout system for its HQ in the heart of New York City's TV and motion picture district. Founded in 2004, SoundView Broadcasting provides media services for over 26 international television channels from countries including India, Pakistan, Bangladesh, Egypt, Sub-Saharan Africa and the USA to audiences across North America and Europe.

PBS39/WLVT-TV in Pennsylvania chose a dual channel PlayBox Neo playout system for the third phase of the infrastructure expansion project which it commenced in Q4 2017. This includes the integration of an AirBox Neo platform with TitleBox Neo software to be used for graphics and channel branding: “PlayBox Neo has partnered closely with us so that we can operate five separate broadcast channels with the greatest possible efficiency,” says CTO Andrea Cummis. “Phase 3 continues our modernization program with an additional dual channel AirBox Neo server operating within a framework that gives our production staff fast access to the TitleBox Neo graphics creation and text manipulation toolset without having to move outside the main PlayBox Neo user interface. Our engineering staff continue to be impressed by the system's robust build, effective software integration and future-proof expandability.”

Georgia’s most popular television channel, Rustavi 2, chose PlayBox Neo Channel-in-a-Box servers as the core of a new high-definition broadcast playout system at its headquarters in Tbilisi. The project includes two systems, configured for operation in main and backup roles. It was completed in co-operation with systems integrator Broadcast Technologies Ltd which is itself based in Tbilisi.

Minacord Media, founded and owned by composer, songwriter, singer and instrumentalist Zeljko Joksimovic, chose PlayBox Neo Version 19 Channel-in-a-Box systems to power three new television channels: Kazbuka, K1 and TV Doctor. All three are transmitted via cable and IPTV in Serbia, and on the Go4TV mobile-TV platform across Croatia, Slovenia, Austria plus the wider European Union, Switzerland, Canada and the USA. The project was negotiated and completed by PlayBox Neo distribution partner PBT Adria, from initial design and cabling through to on-site integration, configuration and testing.

Televízia Arena Sport in Slovakia chose multiformat servers from PlayBox Neo to power an expansion of the channel branding and playout facilities at the broadcaster's production and transmission headquarters in Nitra, Slovakia. Three new sports channels will each be assigned an AirBox Neo Channel-in-a-Box system, delivering 1080i/50 high-definition with simultaneous internal transcoding to 625-line SD. The project was negotiated and supervised by Bratislava-based systems integrator Centron Slovakia sro.

PlayBox Neo also completed an expanded playout system at the Bangkok studios of broadcaster TV Direct. The installation doubles the network's capacity from three to six channels, transmitted in high definition via direct-to-home satellite and online. “PlayBox Neo's CIAB system has the fourfold advantage of being installer-friendly, efficient to operate, easy to expand and highly reliable,” comments TV Direct's MCR Manager Akarachai Tobsin. “This new investment comprises three additional AirBox Neo-19 servers, each configured with the resources we need to schedule programs, commercials and promos as far in advance as the production team chooses to work.”

In the same city, an AirBox Neo-20 Channel-in-a-Box TV playout system was completed for PSI Broadcasting, one of Thailand's leading suppliers of broadcast playout facilities. This will be assigned to tvN Thai which PSI transmits on behalf of Korean partner CJ ENM. “AirBox Neo-20 server-based systems are the trusted and proven core of the service we provide to our various clients," comments Rattana Taipong PSI Broadcasting Technical Manager.”