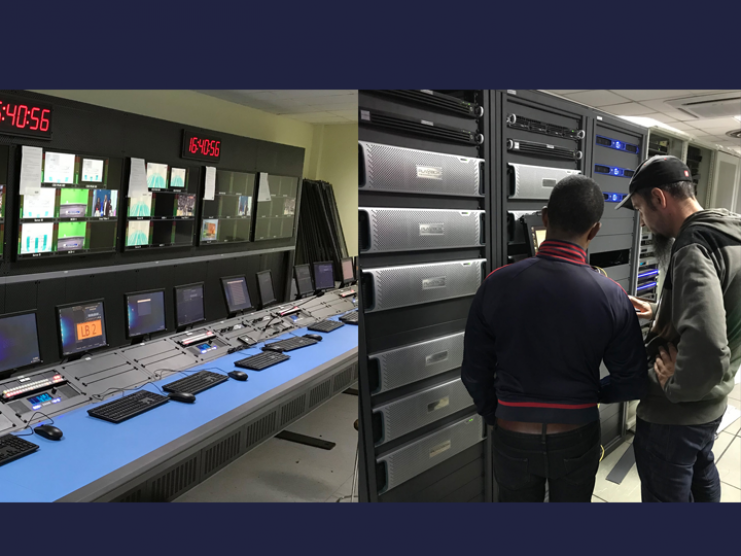 Zambia's state-owned television and radio network, Zambia National Broadcasting Corporation, has chosen PlayBox Technology Neo as the core of a new playout facility controlled from its headquarters in Lusaka. The newly completed system was installed by Beijing-based StarTimes in partnership with PlayBox Technology Asia Pacific.

"ZNBC initially upgraded to Neo at its studios in Zambia's second largest city, Kitwe," comments PlayBox Technology Asia Pacific general manager Desmon Goh. "Then it expanded its Lusaka headquarters. That transition from legacy analogue equipment was greatly appreciated both by the network's technical and operational staff. StarTimes was then commissioned to replace the analogue system at the network's central studios with PlayBox Technology Neo."

"A key requirement was the ability to allow region-specific insertion of interstitials such as commercials into the regional stations as well as the integration with the existing media asset management system by Chengdu Sobey Digital Technology. The channel schedules are prepared using ListBox Neo preparation workstations linked to the relevant AirBox Neo servers via a 10GbE local area network. Each AirBox Neo can source content from the same LAN, from an incoming satellite feed or from locally generated SDI feeds. The project also included provision of a 96 terabyte server for storing programmes and interstitials."

"In addition to the servers and software modules, six full weeks of training were provided at StarTimes office in Beijing plus three days of refreshment training at ZNBC in Lusaka. The new system is now in successful operation."

AirBox Neo enables ZNBC to source and process video and audio content from practically every known production platform or video server. Playlists can be scheduled weeks in advance to allow fully automated playout. Gaps or time overlaps are automatically resolved to ensure continuous operation even when conflicting timed events are present. Special facilities ensure uninterrupted operation if content files or even entire schedules are missing or misplaced. Changes to the playlist can be made at any time, even during an on-air session.

The Zambia National Broadcasting Corporation, ZNBC (www.znbc.co.zm), operates diffusion services across three radio channels (Radio 1, Radio 2 and Radio 4) and two television channels (TV1 and TV2). It also has plans to introduce new channels. ZNBC is mandated to educate, inform and entertain all Zambians by means of radio stations and television channels. The corporation is wholly owned by the government of the Republic of Zambia and was established on April 1, 1988 as a public service broadcaster, the precursor to Zambia Broadcasting Services (ZBS). The corporation's core responsibility is to provide radio and television broadcasts throughout the country. Its other role is to provide signal distribution to other broadcasting stations.

StarTimes (http://startimestv.com) is a Chinese multinational media company with a strong presence in Africa. It provides digital television technologies to countries and television broadcasting industries which are switching from analogue to digital television. StarTimes is also a leading digital TV-operator across Sub-Saharan Africa. Its arrival in the African market made pay-TV affordable to every family. As of May 2017, StarTimes operates in 30 countries and serves 10 million subscribers.