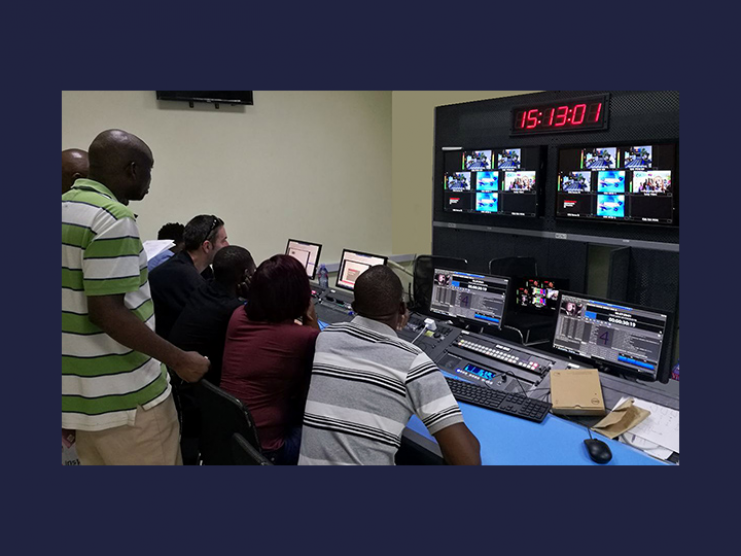 Zambia's state-owned television and radio network, Zambia National Broadcasting Corporation, has chosen AirBox Neo from PlayBox Technology as the core of a new playout facility at its production studios in Kitwe. The newly completed system was installed by Beijing-based StarTimes in partnership with PlayBox Technology Asia Pacific.

"The resultant system comprises four AirBox Neo channel-in-a-box servers in two-plus-two primary-and-backup configuration. It includes a ListBox Neo PC which gives programme editors the ability to create and edit schedules days or weeks in advance of transmission. ListBox Neo provides facilities such as text search, clip copy/paste and schedule printing. It also has a clip trimmer for simple programme editing.

"A key strength AirBox Neo is its ability to interface easily with a very wide variety of devices from other manufacturers. The ZNBC installation is closely connected with third party equipment including a vision production mixer and a fast-acting automatic primary-to-backup switch. Installation was completed quickly and training was very straightforward thanks to the very logical AirBox Neo user interface which displays all the information necessary a given task plus alerts when necessary tasks are awaiting attention."

The Zambia National Broadcasting Corporation, ZNBC (www.znbc.co.zm), operates diffusion services across three radio channels (Radio 1, Radio 2 and Radio 4) and two television channels (TV1 and TV2). It also has plans to introduce new channels. ZNBC is mandated to deliver an unparalleled public value proposition of educating, informing and entertaining all Zambians by means of radio stations and television channels. The corporation is wholly owned by the government of the Republic of Zambia and was established on April 1, 1988 as a public service broadcaster, the precursor to Zambia Broadcasting Services (ZBS). The corporation's core responsibility is to provide radio and television broadcasts throughout the country. Its other role is to provide signal distribution to other broadcasting stations.

StarTimes (http://startimestv.com) is a Chinese multinational media company with a strong presence in Africa. It provides digital television technologies to countries and television broadcasting industries which are switching from analog to digital television. StarTimes is also a leading digital TV-operator across Sub-Saharan Africa. Its arrival in the African market made pay-TV affordable to every family. As of May 2017, StarTimes operates in 30 countries and serves 10 million subscribers.