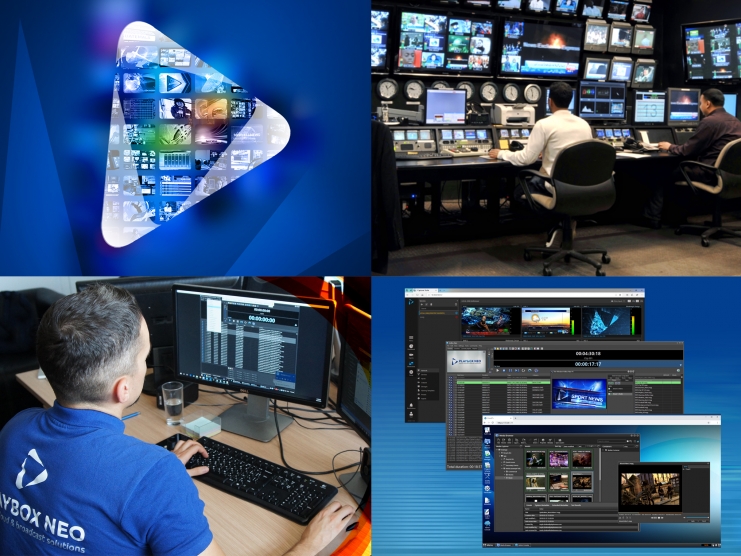 2020 was meant to be the year 8K became a potential successor to 4K as the preferred format for high-end broadcast and digital film production. All the elements were in place: affordable cameras, switchers, archives, editors, analyzers, monitors and the necessary glue. 8K consumer TVs were becoming available at mass production prices and the 2020 Tokyo Olympics were perfectly timed to galvanize public attention via NHK's 8K satellite TV channel.

The key challenge of 2020 proved biological rather than technical, mitigated to some extent by decades of investment in global telecommunication. Broadcast media played an increasingly useful role during the year in the fight against the coronavirus pandemic by providing information and diversionary entertainment. Internet and phone connectivity throughout much of the developed world allowed many people to work from home.

In a playout context, PlayBox Neo system operators were able to make full use of secure IP remote control to control their production, scheduling and transmission from whatever location they chose. This feature was not originally created with home working in mind but allowed both that and the much wider application of secure remote-site system operation. In many cases, the operator to server link is via local intranet from a presentation suite or master control room to the actual equipment in the facility's apparatus room. In others, the server may be located on the premises of a playout service provider in a separate town, country or continent. Programs are delivered to the server as a video data files, each packaged with audio channels in one or more languages plus relevant metadata such as open or closed subtitles.

2021 looks set to be the year in which remote working becomes an integral part of many broadcasters' lifestyle, even if only as a standby option. This in turn is likely to accelerate demand for purely IP-based systems such as our Cloud2TV which was designed with remote operation as a central feature. Many broadcasters appreciate the operational independence inherent in buying, hosting and maintaining their own playout facilities under the watchful eye of an on-site technical supervisor. But they too are subject to sudden demands to accommodate one or more extra channels at short notice. Cloud2TV offers the ability to scale up for any number of additional channels, whether permanent additions to a network's output or temporary 'red-button' channels related to a specific event such as the planned 2021 Tokyo Summer Olympics. The crucial element is flexibility. Many broadcasters operate from city-center premises where space tends to be at a premium. Third-party playout service providers, on the other hand, tend to locate themselves in rural areas to maximize their cost-efficiency; more often than not adjacent to a satellite teleport.

The transition from dedicated hardware to software running on technically proven IT servers dates back to the very start of our company 21 years ago. What was then the exception is now standard practice, allowing systems to be integrated more closely than ever under unified software control. 2021 looks set to see greater than ever use of the MOS (Media Object Server) protocol which reduces the need for device-specific drivers and so gives broadcasters the freedom to select hardware and software from multiple vendors. MOS was first used to allow newsroom computer system users to operate character generators and playout servers without leaving their desks. It is fully supported by ProductionAirBox Neo-20. A variant of our standard AirBox Neo-20, ProductionAirBox Neo provides content playout for news, live shows, studio screens and video walls, live production broadcasts and other places where video/audio content have to be displayed.

A continuing trend during 2021 is a likely expansion in the number of special interest television channels leveraging latest-generation equipment such as robotic cameras, virtual studios and 'OB-in-a-box' production systems. Many such channels started as IPTV services over the years with the most successful progressing into satellite transmission. That could turn on its head to some extent if satellite-based IP delivery becomes a serious challenge to fiber and cable. From a playout perspective, the transmission medium is academic; we support them all. Of much greater relevance is the profusion of file formats used to deliver content to the broadcast facility before it is actually loaded into the schedule. Ingest desk operators have to be ready for each and all of these as well as industry-recognized containers such as MXF, MOV, MP4, TS and PS. Closed-caption data also needs to be ingested.

The PlayBox Neo development team responded to this challenge during 2020 by creating Capture Suite which is designed to clear what might be termed the ingest log-jam. It provides the processing flexibility needed to handle all the file formats currently in common use for content delivery, including ProRes, XDCAM IMX, XDCAM HD, XAVC, MPEG2, H264, HEVC, DNxHD, DNxHR and DV. This list looks set to grow if or when 8K becomes a popular standard for home television viewing. Capture Suite handles all the required SD, HD and UHD video, audio, and ancillary data conversions internally without needing any external processor. Each ingest instance can produce two main encodings in real-time, complete with proxy video, multiple audio and video formats, multiple frame-rates, multiple resolutions and multiple audio mappings. Capture Suite also supports brand-oriented protocols such as Blackmagic Design Decklink, AJA Corvid 44/ 44-12G and NewTek NDI which are becoming increasingly popular.

Year of the cloud?

Will 2021 be the year of total transition to the cloud? For some channel managers yes, both at the smallest scale and the largest. We are seeing growing demand for Cloud2TV from new startups looking to minimize capital outlay during their formative years, and from large networks seeking to expand their business without having to accommodate extra hardware. Medium-size broadcasters still tend to prefer the operational independence of running their own on-site playout servers and keeping direct control over their core infrastructure. It is tempting to predict an accelerating transition from purely on-site servers to on-site-plus-cloud hybrid playout but our role is to offer our customers the greatest possible choice rather than imposing a 'one-size-fits-all' solution.

2020 proved beyond all question the value of electronic connectivity, both broadcast and one-to-one telco. The demise of trade shows during that year took away the traditional risk of 'exhibition throat' caused by too much talking or the sharing of minor coughs and sneezes. But it also masked the very real advances taking place in video display technology, both at the big-screen level and in wearable devices. The coming decade will see an advance from screen-based viewing into truly immersive broadcasting in healthy partnership with immersive computing.