From AirBox to Cloud2TV : 21 Years of Broadcast Media Playout Innovation 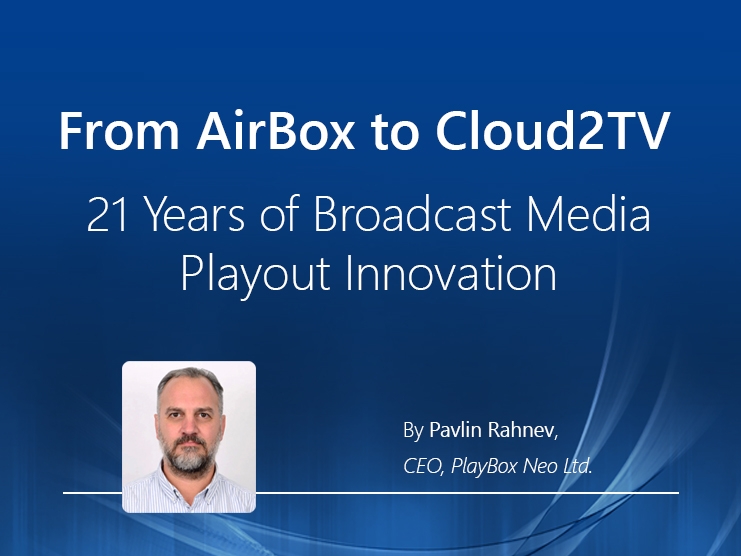 Television broadcasting must surely be one of the most impressive of all human developments, allowing high quality graphics and sound to be shared by a worldwide audience within seconds of an event taking place. The first known attempt to capture an image dates back some 40,000 years: the Venus of Hohle Fels carved figurine unearthed relatively recently in Germany. By 500 BC, Greek sculpture had reached geometrical perfection – many specimens also being brightly painted though in most instances only a few flakes of colour have survived. Roman artists progressed sculpture to an almost photo-realistic level though at huge cost in terms of materials and creative effort. Achieving comparable reality on a flat surface required many more centuries of artistic refinement, eventually aided by optical devices such as the camera obscura, progressing in turn to photography from around 1800 and the pioneering work on cinematography from the 1830s onward. The development of television as we know it today began approximately 100 years ago.

Television broadcasting in the late 1980s and most of the 1990s was largely based on video tape playback interspersed with live links and promos. Channel managers were increasingly using video cassette decks with automated robotic loaders programmed to play specific items at a predetermined time. It was a mechanically intensive process needing careful maintenance to safeguard against head wear and tape path contamination. Installing a backup robotic system, in case the main one failed on air, was a costly option. Another complication with tapes was the need to ensure programmes and interstitials were not lost in their travels between storage library, edit suite and playout room, or damaged during lace-up.

PlayBox Neo traces its origin back to a much more recent starting point, 1999, when we introduced what would eventually become the world’s best-selling television channel-in-a-box. Building on our design team’s broadcast industry experience, our original AirBox and its successors, now at generation AirBox Neo-20, made the whole process of broadcast management more efficient and more affordable than it had ever been. Figure 1 shows examples of the 1999 AirBox and current AirBox Neo-20 user interfaces.

We took a different approach, made possible by advances in the affordability, compactness and speed of magnetic hard disk data storage drives. Our first AirBox allowed a broadcaster channel or network’s entire schedule to be sourced as digital files and stored on its internal drive or a dedicated network-attached storage server. File-based content could be sent over practically any secure data line, dedicated or IP-based, regardless of distance, eliminating the cost and potential delay of using couriers. Mechanical reliability was another advantage of HDDs. Yet another was the ease with which our channel-in-a-box approach could be expanded from a single channel to a practically unlimited multi-language multi-channel system.

Remote working was another key feature. Channel managers were quick to recognise the potential of outsourcing all their playout activity to a specialist service provider if they needed to save space at inner-city headquarters. The service provider could be in a different country, typically addressing expatriates viewers in a different timezone.

Operational security is a vital element of every broadcast operation and much more economical to achieve with Channel-in-a-Box than with a high-cost robotic tape system. All PlayBox Neo systems can be configured for single-unit operation or twinned for use in main and backup modes.

Schedule management from a notebook

2001 saw the launch of ListBox, a software module allowing programme editors to create and edit schedules days or weeks in advance of transmission.  Still very much a current product (since upgraded like most of our products to the Neo series) ListBox also has a clip trimmer allowing programme editing. It can bе installed on the main AirBox server or on practically any third-party PC, running flawlessly on a notebook, even with software-based trimming and previewing.

By 2002 we had achieved an installed base of 250 playout channels and we were ready to start international distribution.

Titling, graphics generation and text management are a core element of every TV channel. In 2003 we introduced an option allowing all three tasks to be handled within the main CIAB user interface. TitleBox provides total control during on-air session. The feature set includes horizontal crawling text, vertically rolling credits and messages, still and animated logo graphics, analogue and digital clocks, banner slideshows and chat text with automated horizontal or vertical scrolling. Among the additional creative facilities are pre-constructed graphic components, video resizing (from live source or file), window-style display and website content ingest. A companion module introduced in the same year,  DataBox is a highly integrated SQL-based database for media and content management, allowing instant access to more than 20,000 records simultaneously. All PBN modules obtain information about visual content from DataBox. This enables many tasks such as logo overlay, archiving/retrieving data and building/conforming on-air playlists, to be simplified or completely automated.

As of 2004 we achieved an installed base of 1,000 playout and branding channels.

2005 saw the launch of SafeBox which replicates remote content to local playout server folders for safe transmission. This allows significantly faster processing when moving primary or copied content to the playout and central storage servers. A newly created workflow routine protects content being overwritten. Expired daily schedule content is automatically deleted or moved to a predefined folder for manual deletion or archiving. In this same year, our installed base of playout and branding channels doubled to 2,000.

In 2006 we added high-definition support across our entire product range. We also launched DVB Playout as well as in-the-box DVB multiplexing. On the corporate front, we became seriously global with the establishment of seven sales and support offices at various locations around the world.

Commercials are a necessary element of many publishing operations, not least in the TV arena. AdBox, which dates back to 2010, allows content owners to target advertisements for specific audiences by using ad insertion and digital programme insertion in both standard and high definition. Suitable for either SDI or DVB, it can be scaled easily to match the next generation of targeted advertising solutions that are driving the current revolution in TV advertising. Hundreds of hours of ad insertion and DPI can be scheduled. It is available for standalone operation or can be integrated into existing workflows and systems.

The story goes on, practically every year seeing a significant expansion in the range of modules available to support AirBox. Multi-Backup Manager, introduced in 2011, allowed multiple playout channels to be backup up simultaneously (also known as n+m redundancy).

2012 and our installed base has reached 12,500 playout and branding channels. ProductionAirBox, introduced in this same year, is a TV content manipulation and delivery system with the near-zero latency demanded for the fast-paced work environment of broadcast news, sports and live production. A wide range of file formats and resolutions can be imported into the playlist, with up to 16 digital audio channels to accommodate multi-channel multi-language programmes. The feature set also includes forward or reverse shuttle at up to 32x speed, mixing of different video resolutions and formats in a single playlist, logical content trimming, multi-channel audio output, plus support for a wide variety of compression standards and media containers. The NewTek Network Device Interface (NDI) open protocol for IP production workflow is supported.

In 2016 we expanded AirBox Neo to support UHD, HD and SD media playout from single server. Detailed refinements included a streaming input supporting HTTP, HTTP Secure, UDP, RTMP, MMS, MMSH and YouTube. RTMP streaming output improvements allowed easy web streaming. We also added a virtual output which supports multiple instances. Timecode could now be applied to MOV files. Multiple DeckLink cards can now be used for multi-channel ad insertion. Enhancements were also been made to the clip trimmer and audio level control. Details like these may sound nitty-gritty but they are exactly the kind of features requested in feedback from customers. Responsive attention to detail is important to the success of any business, especially in areas related to electronics and telecommunications where practically all things are possible.

TV channel managers differ in their preferred style of working. Many like to buy a hardware-based turnkey, taking direct responsibility for its operation and maintenance. Others prefer to buy software to run on their own servers. A third option is to delegate the actual hardware to third-party playout service provider, sending content and schedule commands via an IP link. A fourth option is the platform-as-a-service approach, leasing a private or public cloud with CDN support to reach audiences in specific regions. Our Cloud2TV offering, introduced in 2019, mirrors the full feature set of PlayBox Neo and its modules to match any of these options. Cloud2TV offers numerous advantages such as fast and on-demand channel launch, endless scalability, 24/7 reliability, web-based access and IP workflow. Examples of the Cloud2TV user interface can be seen in Figure 2.

In 2019 we launched the Neo-19 system upgrade across many modules in our entire product range, adding new features such as support for UHD.

Capture Suite, introduced in 2020, was designed to simplify the entire process of broadcast content ingest. A multi-channel multi-server live ingest system, it supports a wide range of codecs and containers. The ingest operator controls all available ingest servers from a single user interface to achieve maximum efficiency. Functions such as input selection, ingest presets and file-naming conventions are just a single click away from the user. Input and output configuration, as well as storage parameters, are easily accessible. Video content and audio levels can be previewed easily using Capture Suite's built-in multi-screen display, seen in Figure 3. Like PlayBox Neo GUIs, the user interface has a low glare background which remains eye-friendly throughout a long working shift. Capture Suite employs a client-server architecture which can be scaled to accommodate a practically unlimited number of channels.

2021 to date has been a year of refinement centred on our Neo-20 series software. Operator efficiency continues to be the key driver, allowing reliable round-the-clock playout. Scheduling, ingest, QC, video editing, promo-creation, graphics, news banners, tickers, prompter feeds and presentation are all handled within a user-friendly unified graphic interface which is easy to learn and to operate.

With sales now well in excess of 19,000 playout and branding channels, we remain as attentive as ever to the present and potential needs of our customer base at its widest, including broadcasters, content owners, playout service providers and media data centres.