Broadcast Playout Automation: How to Start and Run Your Own TV Channel 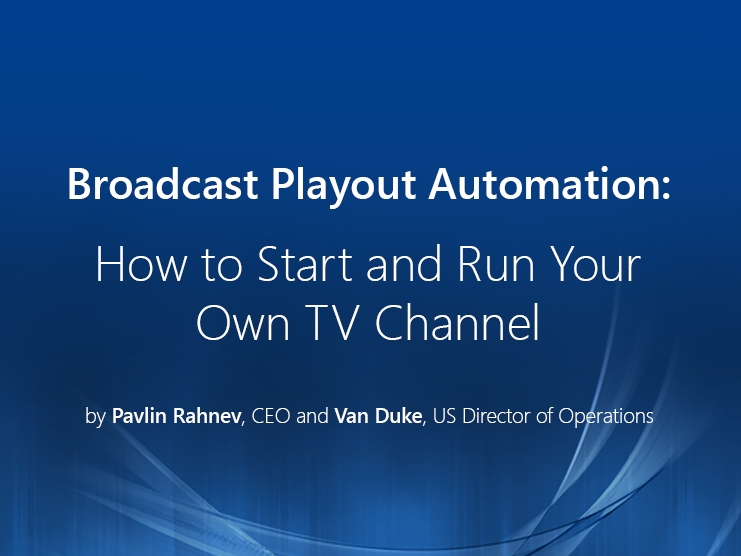 by Pavlin Rahnev, CEO and Van Duke, US Director of Operations, PlayBox Neo

There has never been a better time to start a new television channel. High-quality cameras and editing systems today are more affordable than they have ever been, easier to use and so compact that many TV news stringers are able to shoot all the footage they need with a smartphone. Urgent video files are sent straight back to base by the fastest available route and edited on standard desktop computers before being transmitted on-air or online. At a push, even the editing can be done on location.

Global health concerns raised during 2020 by Covid-19 have increased the importance of television not just for entertainment but as a shared source of real-world information. The online world has also increased hugely in importance to the point where it now rivals traditional cable TV, terrestrial networks and direct-to-home satellite transmission. Every TV sold today is IP compatible.

What makes this situation healthy for broadcasters is that television channels are no longer compelled commercially to cater for the widest possible audience. Specialization is today's broadcast business model – catering for well-defined interest groups by offering factual knowledge based on the shared experience of experts in a given subject.

A question that comes up in every broadcaster's mind, whether new-start or established, is how to reach the viewing audience most cost-effectively. The global transition from analog to digital terrestrial, satellite and cable transmission began in the mid 1990s and is now largely complete. Worldwide investment in optical fiber networks today allows content to be delivered via a dedicated line or public internet from the studio to the local satellite uplink. An increasingly attractive option is to stream direct to viewers entirely via the internet. Given that practically all consumer television receivers and personal video recorders sold today can be connected to the internet, IP delivery is clearly the future. IP also opens up the potential of broadcasting to a worldwide audience.

Our aim at PlayBox Neo, right from the company's origins 21 years ago, has been to make broadcasting cost-efficient and stress-free. Cost-efficient by eliminating all the clock-watching drudgery associated with starting programs, promos and commercials at exactly the right time. Stress-free by allowing key decisions to be made hours, days or even weeks ahead of the transmission time.

AirBox Neo-20 allows a complete TV channel to be housed in a 3U chassis no bigger than a standard desktop computer: a true Channel-in-a-Box. In fact it supports up to two channels in 3U including the optional but usually requested TitleBox Neo-20 titling and text-generation software module.

Automated playout adds one additional step to the channel management process: all content must either be produced in the first place as a digital data file or converted into one before it can be ingested into the playout system for terrestrial, cable, satellite or internet-based transmission. Nowadays practically all video content is created digitally and most analogue productions have been digitized to ensure their long-term survival.

Built inside every AirBox Neo-20 are transcoders which automatically detect the format of each content file and convert it to the digital standard required for actual playout. Our recently introduced Capture Suite is designed to make this process even easier, especially in a media organization where multiple TV channels are being managed from a single ingest studio.

TV broadcasters generate the illusion of operating largely live until or unless the program guide reveals an excessive dependence on repeats. The reality is that transmission schedules are planned several days or weeks in advance. The automation within AirBox Neo-20 makes this seemingly formidable task a relatively easy one to accomplish. So easy in fact that an entire television channel can be managed from a physically compact production center with a single studio for live-to-air or recorded presentations. The combination of AirBox Neo-20 and TitleBox Neo-20 even supports virtual-studio-style chromakey operation, allowing announcements with superimposed video or photos to be made direct to camera.

So how to reduce the need for experienced technicians trained to push the right buttons at exactly the right moment? Firstly by removing the need for intensive training. The entire AirBox Neo-20 playout control routine can be learnt quickly by anyone accustomed to working with Windows-based software. Figure 1 shows the AirBox Neo-20 multiscreen control GUI. The process becomes so stress-free that it can even be performed remotely via a link from an ordinary desktop PC to the actual AirBox Neo-20 wherever located – in another city, another state, even (quite routinely) on another continent.

The defining requirement for any TV station is that it has access to actual programs, whether produced on site, created and sent in by dedicated contributors, sourced from partner channels, purchased for one-time or repeat transmission, or stored in the station's archive.

Step 1 in the playout process is to decide which program files will be played out and at what time. A master list is normally created by one or more senior channel managers.

Step 2 simply involves checking to see if the listed files are available for copying to the AirBox Neo-20 playout folder and, if they are, assigning the desired playout time. AirBox Neo-20 then automatically displays the time of the next available start point. This process continues until the schedule for a given day is as full as it can be. AirBox Neo-20 automatically alerts the operator to any remaining gaps so that missing programs can be traced long before they are due to go on air.

Step 3 is to integrate commercials, the lifeblood of almost every television channel. This is handled in a similar way to the program files including decisions such as exact timing. Here again, PlayBox Neo creates an automatic alert whenever it detects that a specified commercial has not yet been ingested to the transmission folder.

Step 4 is to integrate short-duration video productions promoting upcoming programs. TitleBox Neo-20 also allows these to be prepared quickly as graphic overlays based on administrator-approved templates conforming to a channel's establish graphic style.

Step 5 is to allow gaps at specific times for live-to-camera announcements if required.

If uncorrected gaps still remain at the time of transmission, these are automatically filled with standby content; not recommended practice but far better than lapsing to a blank screen. The show must go on!

A vital part of any automated playout system is the ability to control subsidiary processes such as source transcoding, output transcoding, routing and time-shifting. Transcoding was for many years performed in external hardware but is now largely integrated into AirBox Neo-20. Practically every television station has a standalone router which allows audio, video, sync and related data to be sent along pre-assigned pathways between various devices at a specific site. AirBox Neo-20 allows most leading router brands to be controlled as part of the schedule so that each program can be assigned its specific set of source or destination links.

Neo TS Time Delay is a dedicated product which we developed to meet the needs of satellite teleports, telecoms, international broadcasters and TV networks for delayed TV channel playout. It provides a user-definable delay in 10 second increments up to seven days, logo overlay and multichannel audio.

With one channel successfully established, a broadcaster is well placed to widen its business model by catering for peripheral subject areas or branching out into entirely new fields. From being a channel, it becomes a network. A key strength of the Channel-in-a-Box concept is that it scales up easily from one or two channels in a 3U server to a practically unlimited number of channels operating from a large-scale television network broadcasting across multiple time zones. AirBox Neo-20 is also used very successfully by many globally active playout service providers. The main operating keyboard and screen are typically located in the channel's or network's master control room linked via Ethernet to the actual AirBox Neo-20 chassis in the usually adjacent apparatus room.

More channels do not necessarily mean more space needing to be found to accommodate even a single dedicated playout server. Our Cloud2TV system offers TV channel managers ultimate simplicity, efficiency and agility. It is available in three subscription-based forms, reducing or eliminating the need for up-front capital investment.

Cloud2TV offers the advantages of fast channel launch, unlimited scalability, 24/7 reliability, web-based access and IP workflow. Cloud2TV is fully compatible with existing PlayBox Neo systems and can be used to extend their functionality. It incorporates an intuitive web-based control interface with administrator-adjustable rights assignment, TV channel management, action-logging and notifications. Cloud2TV applications are the main components. Each application functions individually but in close coordination with the others to provide a full set of broadcast services supporting the workflow of an entire TV channel. Specific applications are assigned to content ingest, graphic editing, media browsing with metadata handling and clip trimming, quality control and verification, transcoding, playlist management and audit logging. Software updates and PlayBox Neo 24/7 global support are standard.