Security Beyond Main & Backup by Van Duke, US Director of Operations, PlayBox Neo 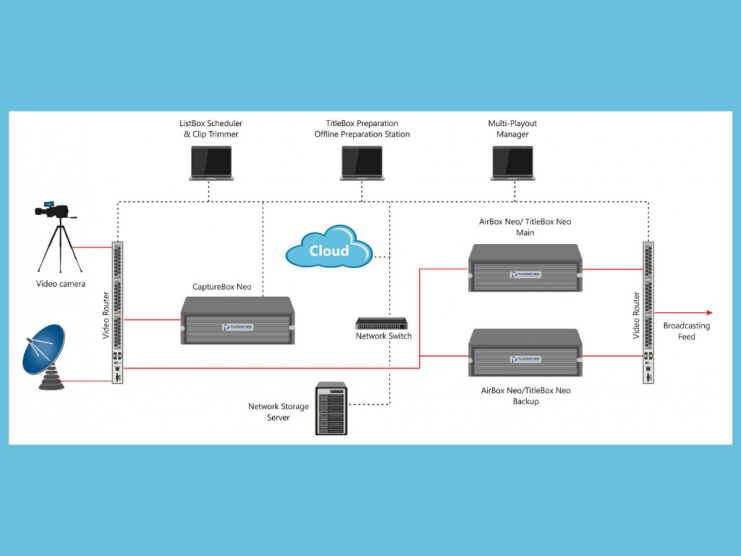 The following is the full-length illustrated feature article published in the March 2019 edition of the online magazine InBroadcast.

Broadcast channel management has progressed far and fast from the early days of high-cost panel-per-product hardware. The transition to file-based playout with digital servers some 25 years ago rewrote the entire broadcasting business model by removing the stress of having to control every action at the strict dictate of the studio clock. Early file-based solutions were costly and lacked the open systems integration which customer today naturally prefer.

PlayBox commenced operations in 1999 to develop a high-quality broadcast presentation and playout solution making the most effective possible use of 'standard' PCs. Our first products were software, designed to run on PlayBox-approved PC platforms.

The broadcast industry was one of the first to see the advantages of replacing high-cost hardware with software-based products achieving the same goal but running on much more cost-efficient mass-produced platforms. This transition accelerated as early generation IBM PCs running Microsoft Windows gave way to more powerful versions of the same platform. The early PCs were great for text and could just about manage static graphics. Later models embraced standard definition video and so it went on.

The capabilities or PCs and the Microsoft operating system were developing so quickly in the early 2000s that we saw the necessity to create our own platform, AirBox, to ensure absolute software compatibility. This proved a wise decision and was the foundation of the company's success over the past 20 years.

AirBox and its AirBox Neo successor made station management so easy that a relatively small number of operators could manage multiple channels right up to the level of 24/7 automation.

An early request from many of our customers was security against late breaking stories. If a major social or 'act of God' emergency occurs, most TV audiences will expect a prompt update rather than continued playout of preloaded content. We responded quickly by adding the ability to inject live news immediately after any currently-playing file.

Technical regulation has always played a key role in broadcasting, ensuring an orderly transition from monochrome to colour, standard-definition to high-definition, HD to nominally 4K ultra-high-definition, and potentially 4K UHD to nominally 8K Hi-Vision. Interconnectivity was long made easy by global adoption of SD-SDI and later HD-SDI. The profusion of video tape formats gave way to a similarly large number of file formats used to store digital video, audio and descriptive metadata on hermetically sealed magnetic hard disk drives. No dust issues there nor any head wear because the head is designed to fly just out of contact with the disk surface. Our PlayBox Neo AirBox server and SaaS-based Cloud2TV can deliver output in baseband SD, HD or UHD SDI, in DVB/ATSC-compliant IP streams and in web-based formats such as RTMP. Simulcasting of SDI and single or multiple IP streams is also possible.  Figure 1 shows an example system.

The mean time between failures of broadcast products has improved enormously over the decades with the transition from thermionic valves to discrete transistors and onward to today's solid state microchips. The average useful life of modern hard disk drives is typically quoted as being between 100,000 and 1 million hours (11 to 110 years). Dust is not a direct issue because modern drives are hermetically sealed. Neither is headwear because, as every IT student knows, HDD heads are designed to fly on a thin lubricant of air.

Quality control is an important safeguard for any broadcast channel. AirBox Neo allows this to be performed both on incoming video streams and already digitised files. All content is checked to ensure that video and audio levels conform to internationally approved technical standards and that there is no break in signal continuity. Any defects detected are automatically brought to the attention of the playout administrator. This eliminates the need for an operator to eyeball ever second of every program before or during playout. AirBox Neo also monitors human issues, drawing attention to a missing file and even, in extremis, filling in with a substitute file.

No single point of failure

When their budget allows, most system designers take care to replicate all critical components to ensure no single element can take a station down. This is fairly easy to achieve but some channel managers prefer the less capital-expensive option of using a subscription-based service such as our Cloud2TV to provide the same degree of redundant protection. This has advantage of being off site so immune from unpredictable events such as loss of mains power, flooding, earthquake or social disturbance. Another and perfectly sensible option is to relegate legacy equipment to a backup role when replacing it with a new system.

Every PlayBox Neo product comes with a full year's 24/7 support warranty, provided either by the local installation partner or directly online from our central office. We perform our own software and hardware development so PlayBox Neo retains full control of the entire design and manufacturing process, extending right through into post-sales service.

Having worked with the headquarters team over many years, I have experienced first-hand the depth of their understanding and the unsurpassed excellence of the support they provide. Maintaining a PlayBox Neo system is largely routine once a system is installed but the support team has proved both fast and flexible in ensuring effective connectivity during the system integration process.

WLVT-PBS39 recently chose ProductionAirBox Neo as the basis of a major upgrade to the media manipulation and delivery system at its broadcast production and playout headquarters in Bethlehem, Pennsylvania. Owned by the Lehigh Valley Public Telecommunications Corporation, the station is equipped with two large studios and transmits in 1080i high definition via terrestrial digital and online. The project was managed by broadcast systems integrator AC Video Solutions which is based in New Jersey. The station staff is very pleased with the ProductionAirBox Neo graphic user interface, which displays exactly the tools and information needed to perform each task in the production process. WLVT-TV39's engineering staff is also very happy because ProductionAirBox Neo is both robust and very easy to maintain.

Among notable recent examples are Olympusat, based in West Palm Beach, FL, where we made the communication with a Wideorbit traffic system function the way Olympusat needed to build the playlist for AirBox Neo. For Miami-based América TeVé, America's largest independent Spanish language television station, we modified a ProductionAirBox to perform a special capture function. At WJFW in Rhinelander, WI, the team responded quickly to keep the station on the air following an operator error, modifying the GPI settings to work with legacy equipment.

The NAB conference made security a theme in April 2017 and again in 2018, both events notable for using sniffer-dogs to check the session delegates for drugs and explosives. The focus was mainly on achieving isolation against malicious hacking. Such protection is of course vital for any computer operator and is another reason we took the route of developing our own dedicated server both in AirBox Neo and as the basis of Cloud2TV. Software-only playout solutions based on third-party servers simply do not offer that degree of operational security. It is a formula that works and enables our many customers to sleep securely at night.