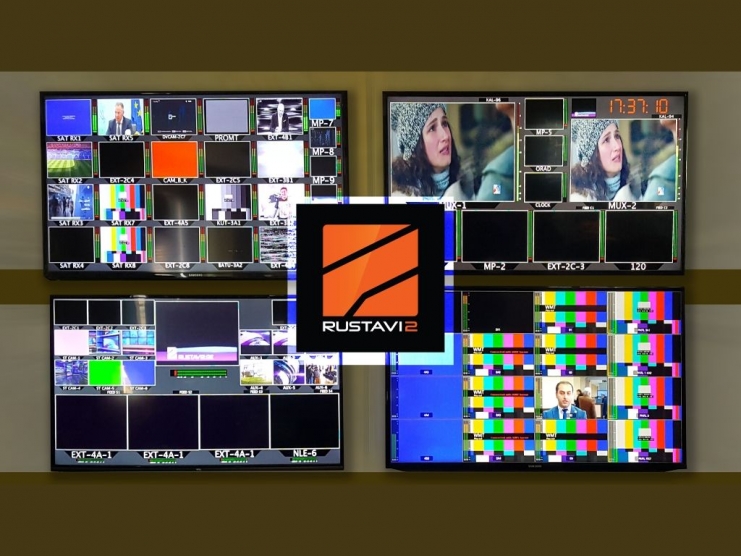 Georgian free-to-air television channel Rustavi 2 has chosen PlayBox Neo Channel-in-a-Box servers as the core of a new high-definition broadcast playout system at its headquarters in Tbilisi. The project includes two systems, configured for operation in main and backup roles. It was completed in co-operation with systems integrator Broadcast Technologies Ltd which is itself based in Tbilisi.

"We recently decided to modernise our playout facilities to increase the channel's operational efficiency," comments George Gocha Kumsiashvili, Director of Production & Technical Support at Rustavi 2. "PlayBox Neo Channel-in-a-Box meets our requirements exactly in terms of technical performance, ease of use, interconnectivity and reliability. It is also very compact which both simplifies installation and conserves space in our central apparatus room."

"Rustavi2 purchased a separate ListBox Neo playlist preparation and scheduling license for each server," adds Sergei Kazaryants, Director of Operations at Broadcast Technologies Ltd. "Both servers are used in conjunction with a Guramex vision mixer, interfaced via an automation module. Part of our role was to ensure the automation was programmed to achieve the closest possible integration. This was achieved quickly and easily and the complete system is now fully on air."

Designed for 24/7 unattended operation, PlayBox Neo Channel-in-a-Box can also be operated manually including the ability to handle live-to-air throughput. It is supported by a wide range of optional modules. Output can be delivered in baseband SD, HD or UHD SDI, in DVB/ATSC-compliant IP streams and in web-based formats such as RTMP. Simulcasting of SDI and single or multiple IP streams is also possible. For automated playout/streaming PlayBox Neo Channel-in-a-Box allows playlist scheduling for weeks ahead. Gaps and time overlaps are automatically resolved to ensure continuous operation even when conflicting events are present. Special facilities ensure uninterrupted operation if content files or even entire schedules are missing or misplaced.

ListBox Neo enables programme editors to create and edit schedules days or weeks in advance of transmission. It provides facilities such as text searching, clips copying/pasting and schedule printing. ListBox Neo also has a clip trimmer for simple programme editing. No special server or hardware is required. ListBox Neo runs flawlessly even on a notebook, even with software-based trimming and previewing.

Established in 1994, Rustavi 2 (www.rustavi2.ge) is the most popular and successful TV station in Georgia. The channel's output includes a mix of news, documentary programmes, light entertainment, music and sport. Rustavi2 is accessible to more than 85% of the Georgian population.