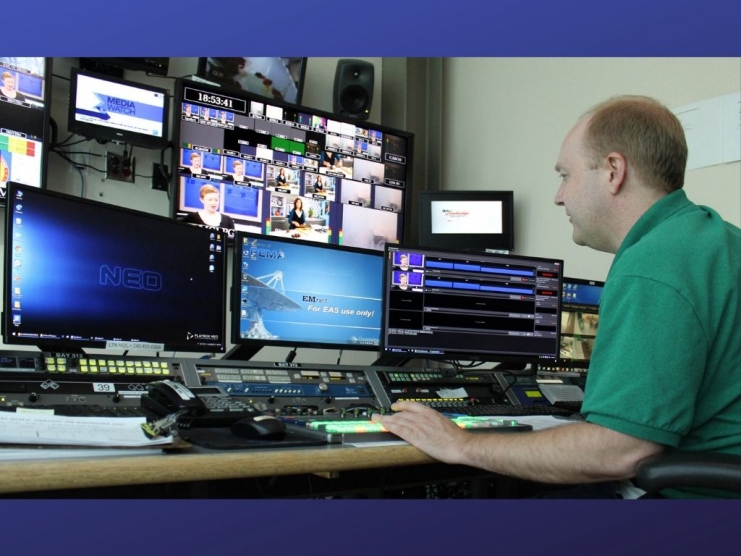 PlayBox Neo announces the completion of a playout system expansion at the headquarters of US public service broadcaster WLVT - PBS39 in Bethlehem, Pennsylvania. This forms the second phase of a project commenced in Q4 2017.

"Phase 1 solved our requirement for a dependable and user-friendly core playout system which replaced legacy third-party servers," says WLVT - PBS39's Chief Technology Officer Andrea Cummis. "It centered on the installation and commissioning of a three channel AirBox Neo for master control, a ProductionAirBox Neo for live news and live production, plus two channels of CaptureBox Neo as the basis of a major upgrade to our media manipulation and delivery system.”

"The Phase 2 system expansion adds a second ProductionAirBox Neo and two extra channels of CaptureBox Neo. Our old clip player died so we replaced it with the ProductionAirBox Neo and had it installed and working in a live show the same day. It is used for a range of tasks including inserting our evening news show into our main HD channel every night at 6:30."

"PlayBox Neo has partnered closely with us so that we can operate five separate broadcast channels with the greatest possible efficiency. Our production team find the system very intuitive to operate, providing the creative tools they need exactly where and when they require them. The engineering staff are equally impressed with the system's robust build, effective software integration and future-proof expandability."

"The Phase 2 system expansion at WLVT - PBS39 is an excellent example of broadcast playout scaling up to match the accelerating demands being placed on this very talented production team," adds PlayBox Neo's USA Director of Operations, Van Duke."

ProductionAirBox Neo provides content playout for news, live shows, studio screens and video walls, live production broadcasts and other places where video/audio content have to be displayed. For live productions, any required changes to the playlist can be made while on-air session. Every clip in the playlist can be trimmed or repositioned. Playout position can be changed on-the-fly with commands like next, jump or shuttle. Such changes are performed seamlessly without stopping the current playout session. One server can be configured with up to four independent players. Each player has independent playlist and playout control. All four SDI interfaces can be assigned as program or preview outputs. Single channel or multichannel user interfaces are available to streamline the operation.

CaptureBox Neo allows HD or SD content to be captured from up to four video sources simultaneously. These can be monitored on a single screen and controlled via a streamlined user interface with enhanced multichannel control and operability. Audio levels can be monitored as loudness/true-peak displays and adjusted when required. Ingested content is available for playback seconds after ingest commences. Capture lists can be imported from third-party traffic systems.

Founded in 1967, PBS39 (www.PBS39.org), virtual and UHF digital channel 39 is a community-owned public media station serving eastern Pennsylvania and New Jersey. PBS39 is licensed in Allentown to the Lehigh Valley Public Telecommunications Corporation, and maintains studios located on the south side of Bethlehem. Its transmitter is located atop South Mountain in Allentown, PA.

WLVT-TV currently broadcasts five channels including the primary PBS channel (39.1), plus PBS affiliates Create TV (39.2) and WORLD Channel (35.2).  In addition, France 24 and MegaHertz Worldview are broadcast on 39.3 and 35, respectively.  PBS39’s primary service area includes much of eastern Pennsylvania and parts of western and southern New Jersey. Cable television carriers include Comcast, Service Electric, RCN, Blue Ridge Cable and others. WLVT-TV is also available over-the-air and throughout the region via DirecTV, Dish Network, and Verizon Fios.