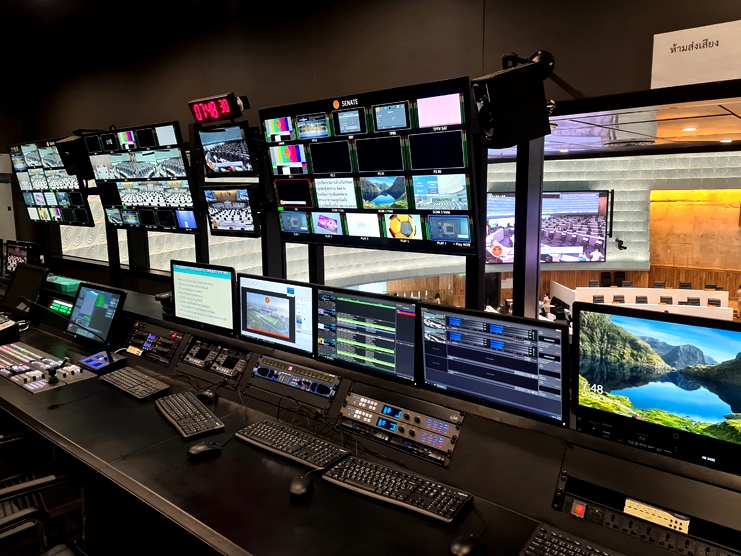 "The Thai government required a solution that would be reliable, operator friendly, space-efficient and future-proof," comments Banjongsak Wonggawee, BASC Project Engineer. "This is a complete new-install which gives the production team full control over the entire workflow from ingest right through to transmission. PlayBox Neo was the logical choice on every count. It was also easy to integrate with third-party devices which is crucial in the design of any system. The system we recommended is based on six production servers. Three of these are configured to capture, schedule and transmit proceedings from the 500-seat Chandra voting chamber in the Thai Senate plus three for the Surian chamber in the House of Representatives."

"ProductionAirBox Neo provides all the tools needed for live production and playout in a fast-paced work environment," says Nut Deesamer, PlayBox Neo Brand Director, Thailand. "Combined with TitleBox Neo and CaptureBox Neo it allows graphics and rolling text to be created and manipulated inside the PlayBox Neo GUI, and all with practically zero latency. This configuration is ideal for parliamentary television where operators don't have the comfort zone of a studio script. CaptureBox Neo allows content to be recorded from up to four video sources simultaneously. Ingested content is available for playback seconds after ingest commences. All captured video and audio can be monitored and controlled via a streamlined user interface. Audio levels can be monitored as loudness or true-peak displays and adjusted when required."

"We have partnered with many clients in the parliamentary and wider government sectors over the years, mostly in Europe," adds PlayBox Neo CEO Pavlin Rahnev. "It is very pleasing to see our solutions selected for this important Thai Parliament project. Parliamentary TV operators require the same high standards of reliability and continuity as mainstream broadcasters in their selection of supporting products and services."

The new system was completed in Q2 2020, on time and within budget, followed by on-site operator training provided by PlayBox Neo and BASC.

Established in 2008, Broadcast Audio Service Company Limited (www.broadcast-serv.com) provides a wide range of broadcast-related services including system integration and maintenance. The company also offers a wide range of products including control and monitoring equipment, interfaces, routers and test instruments. BASC is based in Bangkok.