Broadcast playout: Where it's at and where it's heading 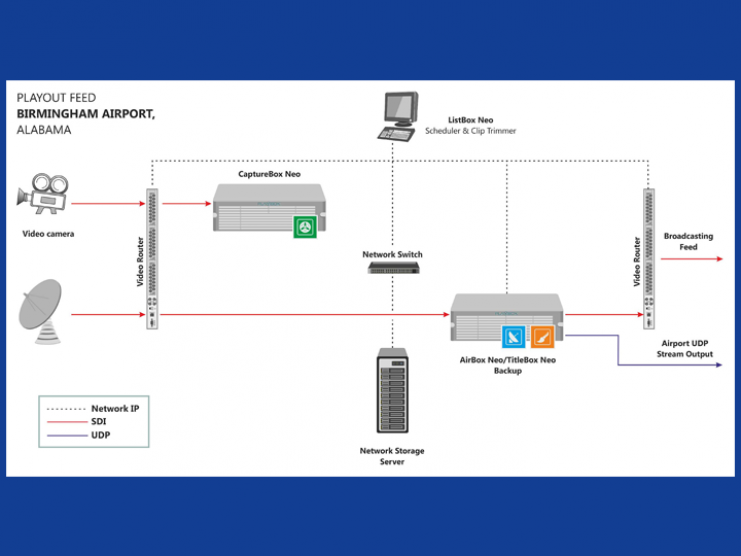 by Van Duke, US director of operations, PlayBox Technology
(based on a presentation to the Florida chapter of the Society of Broadcast Engineers)

The subject of this short article is broadcasting, where we are today and where the industry is heading. We will be looking at master control, file-based workflow and cloud-based workflow.

I cut my teeth in the days when a broadcast video recorder was the size of a very large kitchen freezer. The format was Quadruplex, developed by Ampex and supported by several other manufacturers. The original machines cost around $45,000, equivalent to around $400,000 at 2018 prices. Ampex took orders for 20 machines at its launch in 1956 because the format at that time was a uniquely fast and economical alternative to film. A typical broadcast facility at that time cost literally millions of dollars. Only large corporations could afford startup costs on this scale.

Today you can buy 4 terabytes of storage on a shirt-pocket-sized hard disk drive costing around $100, equivalent to several days of standard-definition TV capacity. Solid state memory capacity is meanwhile advancing so fast it has already made hard disk drives obsolete in mobile computers and is widely used as the storage medium in broadcast and digital film cameras.

Quadruplex recorders had a typical lifetime of about 10 years apart from the fairly expensive business of head replacement. Today the need for high-cost dedicated hardware has been largely replaced by the use of mass-produced 'personal' computer platforms with multicore processors, currently around 24-core.

Channel in a Box

Mass-produced computers became the foundation of so-called channel-in-a-box broadcasting in about the year 2000. They can perform a lot of tasks that use to demand a lot of high-cost hardware, includ-ing graphic overlays, squeeze-backs and side-bars. Back then it was all standard-definition with high-definition just starting to be launched. 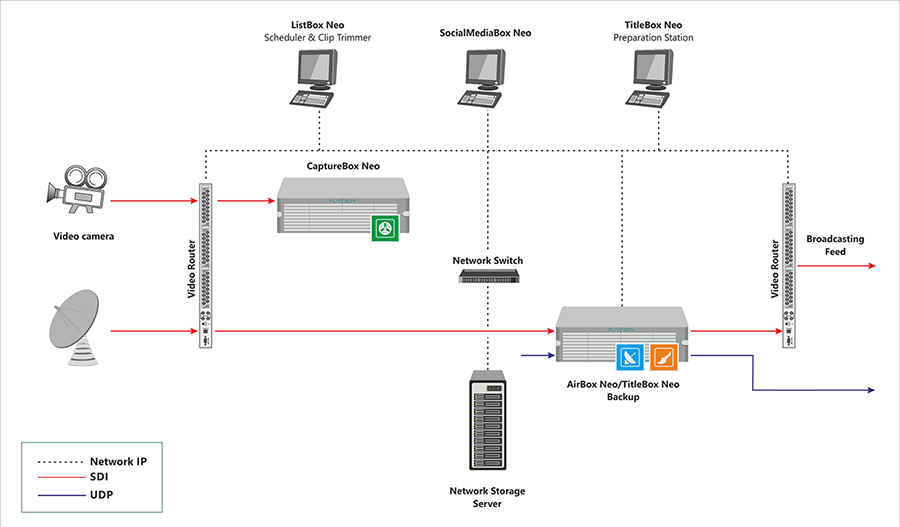 The workflow shows a typical modern workflow with ingest on one side. In the case of PlayBox Technology's Neo, we can do SDI output, scheduling and storage all in the one system. Playlists can be devel-oped within the CIAB server or imported from third-party traffic management software. Graphics can be edited, rearranged and resized within the CIAB server. That kind of flexibility is today considered essential.

We recently added UDP streaming so we can switch between the two. This introduces the ability to integrate social media content into broadcast content.

A typical question raised by broadcasters today is: Can my existing automation system control your CIAB system?

And a common variant of the same request: Can your CIAB control my automation?

In both cases the answer is No! The automation is internal. It doesn't need to control multiple video tape machines but it does need to handle incoming multiple and outgoing file formats.  In today's SD/HD/UHD world, flexibility in terms of file types and signal formats is essential.

This is our graphic control interface to schedule capture for a specific time, or an opeator can just crash record. And remember this is a multichannel system which can be stacked almost without limit as broadcasters or publishers strive to monetise their content.

CloudAir is our cloud-based solution for the new frontier of broadcasting: IPTV. IP streaming in and out on fibre or streaming via public internet straight to the head-end. The million-dollar broadcast environment is great if you have it but no longer essential for new-start-up channels. Cloud-based broadcasting can be controlled by a small team of people, even just one person, regardless of location. The 'cloud' expression is of course not literal. Any so-called cloud-based system is in reality running on servers at a data centre with installed software. PlayBox for example has contracts with Amazon Web Services for subscribers to access from wherever they choose to be. Content goes from AWS to each subscribing channel's choice of content delivery network and set up for a cellphone view, tablet view, computer view and/or OTT boxes.

Today it is possible to deploy hybrid playout systems paralleling the best of server-based technology and web streaming. Given the huge sales penetration of smart phones, it is hardly surprising that many people are watching television on these devices, especially when away from home. Every consumer TV display sold today has a port allowing it to source direct from an internet modem, giving viewers the freedom to explore video-on-demand services such as YouTube. But keep IPTV in its proper context. It is just another avenue and will not replace traditional transmission routes such as direct-to-home satellite, especially in predominantly rural areas, unless satellite-based IP becomes economically viable.

The traditional broadcast market has served television viewers well but times are changing. Broadcasters can transmit live from their websites on a catchup model, reaching viewers who missed the original transmission, and on a global basis to reach viewers around the world. And they no longer need a lot of hardware. The channel-in-a-box model allows up to four channels of playout from just 1 rack unit of space in a broadcaster's racks room, or potentially one blade at an IP-connected internet service provider. How will this future be funded? By dynamic ad insertion if that doesn't drive viewers mad, by content sponsorship, by subscription or by the newly emerging commercial models driving many areas of modern electronic publishing.