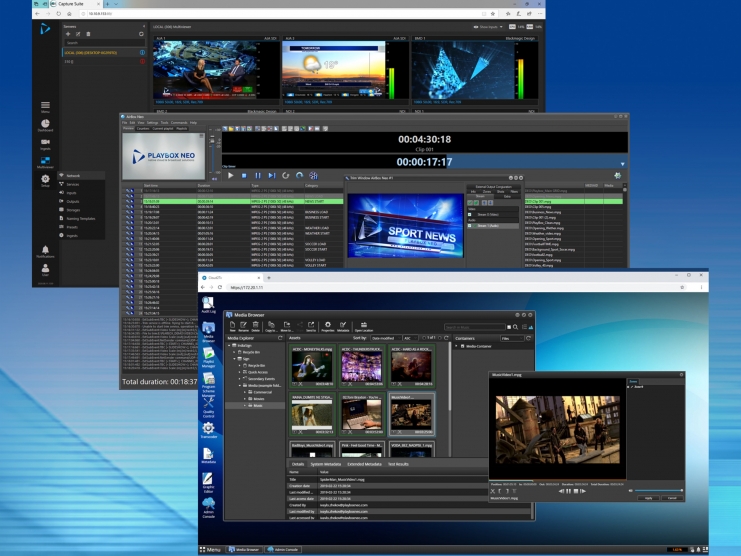 PlayBox Neo marks the 21st anniversary of the AirBox broadcast playout system with the latest enhancements to its 1U and 3U Neo servers and IP-based Cloud2TV. These bring additional operating features and increased connectivity.

New to AirBox Neo is SRT output support. Designed for fast file transmission, SRT provides reliable transmission at the application layer with UDP (User Datagram Protocol) as an underlying transport layer. It enables reliable and secure streaming of high quality content via the public internet. Latency parameter control allows adjustments to be made to counteract slow links. New Caller, Listener and Rendezvous modes support connection to the AirBox Neo playout server from more than one location, typically from main and back up locations. 128/256 bit AES encryption can be activated for content protection. An operator may also now generate and send a dedicated password which can only be decoded at the receiver.

PlayBox Neo is also introducing new integrated in/output architecture which can be shared between AirBox Neo servers and the recently introduced Capture Suite. Connectivity features include an NDI output, AJA output plug-in and AJA input plug-ins plus an HLS input. Simultaneous outputs can be delivered in a choice of video standards and frame rates. On the fly, interactive control over any input/output plug-in is also provided.

A new web-based multiviewer is now available for AirBox Neo. This accepts UHD/HD/SD sources and provides support for AJA, BMD and NDI protocols. The multiviewer includes a dashboard with a built-in resource monitor.

Additional improvements and enhancements to the AirBox Neo series include an NDI input plug-in, internal clock handling and a new device manager for handling live feeds.

"Following on from our recent announcement of Capture Suite, these refinements demonstrate our ongoing commitment to holding our position as the logical product source for any scale of broadcast media playout," comments PlayBox Neo CEO Pavlin Rahnev. "With 21 years of experience, our product development and customer support teams co-operate fully to ensure we meet the industry's present needs and stay alert to its aspirations."