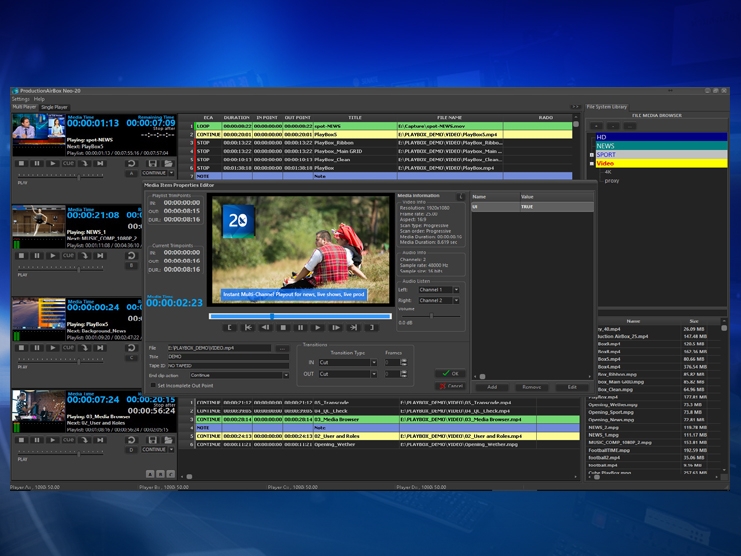 PlayBox Neo announces an expansion to the software connectivity of its ProductionAirBox Neo-20 broadcast playout server, with support now provided for the Octopus Newsroom computer system.

"The Octopus NRCS offers a strong feature set which has received a good reception from broadcasters around the world," comments PlayBox Neo CEO Pavlin Rahnev. "We bridge between our respective platforms via the MOS protocol which allows content archives, graphics manipulation and character generation to be performed directly from the ProductionAirBox Neo-20 graphic interface. The process is intuitive with all relevant parameters clearly displayed."

Developed from AirBox Neo-20, ProductionAirBox Neo-20 provides features designed specifically for live production, including the ability to trim or reposition every clip in a playout while the scheduled session is on-air. Playout position can be changed on-the-fly with commands like next, jump or shuttle. Such changes are performed seamlessly without stopping the current playout session.

A single ProductionAirBox Neo-20 server can be configured with up to four independent players. Each player has a separate playlist and playout control. All four SDI interfaces can be assigned as program or preview outputs. Single-channel or multi-channel user interfaces are available to streamline the operation. Content manipulation and delivery can be performed with the near-zero latency demanded for the fast-paced work environment of broadcast news, sports and live production.

A wide range of file formats and resolutions can be imported into the ProductionAirBox Neo-20 playlist, with up to 16 digital audio channels to accommodate multi-channel multi-language programs. The feature set also includes forward or reverse shuttle at up to 32 times speed, mixing of multiple video resolutions and formats in a single playlist, logical content trimming, multi-channel audio output, plus support for a wide variety of compression standards and media containers. MOS and the NewTek Network Device Interface (NDI) open protocol for IP production workflow are both supported.

Octopus Newsroom (www.octopus-news.com) is a leading producer of newsroom computer systems in the broadcast industry with over 20 years of experience. We develop and supply MOS compliant solutions to TV and radio stations, esports, sports and WebTV channels worldwide. Our team has a passion for developing the latest technologies, predicting trends in the broadcast industry and delivering the best 24/7 support to our customers. Founded on the principle that journalists should enjoy making news, Octopus Newsroom produces the software that broadcasters use to deliver the fastest, most complete and interesting news in the world. From New York to Hong Kong, Sao Paulo to Moscow, we assist thousands of daily users in delivering the latest news for on-air broadcasting.