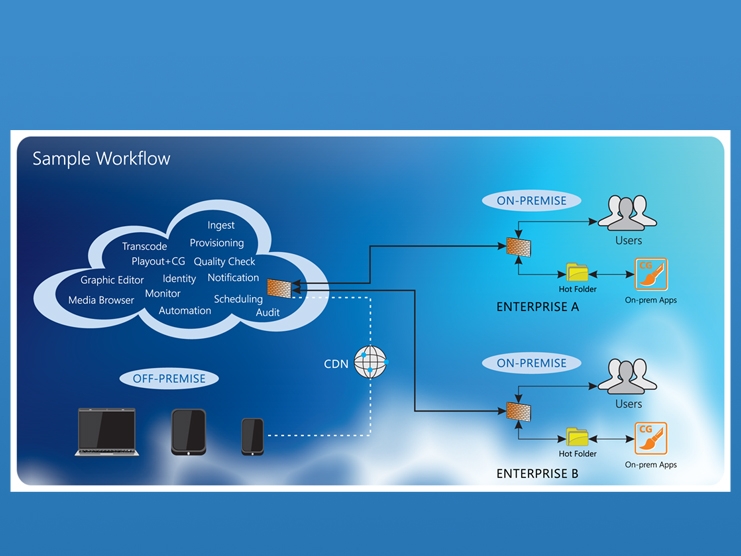 The following is a short preview of the full-length illustrated feature article to be published in the February 2019 edition of the online magazine InBroadcast.

Building on nearly two decades of successful innovation, our aim over the years has been to achieve the high quality and flexibility of digital broadcasting at much lower cost by building on platforms designed for the wider information technology market. These platforms were standard personal computer servers. That demanded selectivity because PC specifications, especially in the early years, varied in terms of processing power and performance. We played safe and developed our own platform to ensure full compatibility between our software and hardware. This business model has proved safe and effective and remains central to all our activity.

Our role in the playout workflow is to ensure that all content, interstitials and region-specific commercials are safely integrated into the broadcaster's transmission schedule, ready for fully automated or manually supervised playout. Most broadcasters like the freedom to make live or near-live inserts, especially for late-breaking news, and obviously we provide that facility.

The growth in sales of IP-connectable television receivers and mobile viewing devices has had a profound impact on television audience habits in recent years, to the extent that many viewers now select content via the web to supplement the programmes available from traditional sources. It is fair to say that the web is itself now a traditional source because many broadcasters are active both online and on air; the distinction has become almost academic. IP connectivity also gives viewers the freedom to watch content at their choice of time rather than having to conform to a specific transmission schedule.

The server-based approach to channel playout gives channel operators the freedom to start small and grow at their own rate rather than be forced into heavy up-front investment in infrastructure before they have grown a commensurate revenue stream. Extra channels can be added simply by installing additional servers, either to accommodate new programme streams or to operate silently in the background with automatic switchover in the unlikely event of the main server failing while on air.

Having pioneered the development of reliable and flexible channel branding and playout from IT-based platforms based on our AirBox Neo server, we now power over 18,000 channels in more than 120 countries. Each installation looks physically similar but is in fact customised to match each customer's specific requirements.

Remote-access playout can be used to handle all aspects of broadcast scheduling, presentation and playout, as proven by our CloudAir solution which offers great flexibility in business-related decisions such as starting a new channel, extending transmission hours, adding new programme streams, or planning ahead for advanced transmission standards such as 4K ultra-high-definition. The core hardware is located at the broadcaster's choice of remote playout centre, typically a 24/7 service provider. Broadcast channel managers manage their programme schedules, ad sales, media management and monitoring via a standard IP-connected browser. The browser can even be run on a laptop computer though a reasonably large monitor display is desirable. This configuration is very economical for new start-up channels, especially those with only a small number of operating personnel.

AirBox Neo and CloudAir solutions power broadcast systems ranging in size from global multinational networks to very tightly focused business-specific channels. In a typical example, a local television broadcaster wins the contract to provide a major airport with a complete travel information service streaming up to 10 hours of news and file-based content every day. Once populated with content, the system can be programmed via a schedule list to operate entirely automatically, including specifically targeted commercials. Supporting UHD, HD and SD playout, AirBox Neo is designed and built to enable 24/7 unattended operation. It can also be operated manually, including the ability to handle live-to-air throughput.

Will internet-based direct-to-viewer IP broadcasting replace terrestrial and satellite transmission? This question is largely academic because most broadcasters are active in all three delivery spaces. Of greater relevance is the freedom content producers now have to scale their channels to whatever audience they choose to target, based on free access, pay-per-view or regular subscription.