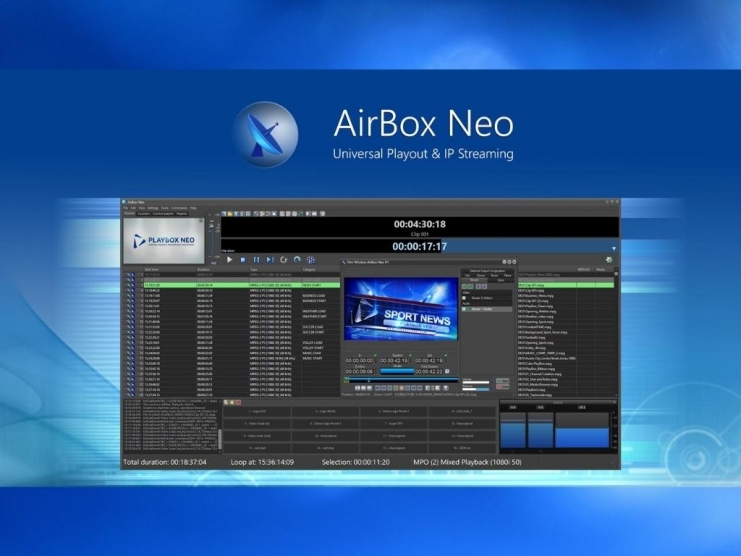 The workflow flexibility of PlayBox Neo’s multi-channel playout system and its solid history with PMCM-TV stations WNWT (home of the New Jersey News Network) and WJLP (serving New York City) led the station group to select PlayBox Neo technology when the time came to its upgrade playout and channel branding capabilities. WJLP and WNWT share transmitter facilities at 4 Times Square in midtown Manhattan. WNWT is currently online with PlayBox Neo, and WJLP will be after its site at New York City’s Freedom Tower comes online later this year.

“With PlayBox Neo, we’ve got the flexibility to run our stations using whatever workflow works best for us,” said Jim McGowan, TV/IT Engineering, PMCM-TV. “We’re currently running in 720p but we upgrade to any signal format we like. We can mix codecs, take an SD signal and make it HD. We can schedule programs, commercials and promos for fully automated playout. Or we can just run programs with commercial blocks, or switch to fully live broadcasting at any time. If we decide to monitor our streaming output, we can also do that within our PlayBox Neo system. The freedom it provides for now and the future provides great peace of mind.”

Two motivating factors behind the switch to PlayBox Neo were the system’s ability to work smoothly with Dual Tone Modulated Frequency (DTMF) triggers and the stations’ existing traffic and billing platform.

“We had a really good working relationship previously with PMCM and their stations,” said Van Duke, Director of U.S. Operations. “We knew going in that we could solve any issues they were having with DTMF triggers and with any communication errors between playout and their traffic and billing system. That flexibility is what sets PlayBox Neo apart from competitive technology. Stations can set up their workflow in any way they want, and we can accommodate it.”

AirBox Neo can mix variety media files in one playlist and provides multiple SDI/IP streaming UHD/HD/SD outputs simultaneously. Media can be trimmed, edited or repositioned. Live productions are streamlined to allow insertion and/or execution of various events or live streams into the playlist. For automated playout/streaming AirBox Neo allows playlist scheduling for weeks ahead.

TitleBox Neo provides considerable flexibility in its operations. It offers the ability to mix unlimited layering in realtime, such as: text, roll/crawl; logos, animated image sequences, clocks, countdowns, timers, 2D objects, DVE, in/out transitions, pictures and banners, video object, playback, etc. Each CG object can be edited while on-air. On-air changes can be made directly to the on-screen objects or within a dedicated preview output and then applied to the master output.

WJLP is a full-power VHF station serving the New York City television market, licensed to Middletown, NJ and owned by PMCM-TV, LLC. It is an affiliate of the MeTV Network and runs the complete MeTV lineup except for two weekend hours when it runs the locally produced “Jersey Matters” (5-6 p.m. Saturdays and 11 a.m.-12 p.m. Sundays).

WNWT (News Weather Talk) is the broadcast home of the New Jersey News Network. WNWT is a New York-licensed independent station. In August 2019, WNWT in New York became the first American station to be assigned a virtual channel of Channel 37 via the digital television Program and System Information Protocol standard, which shows the channel as such on a digital television set.