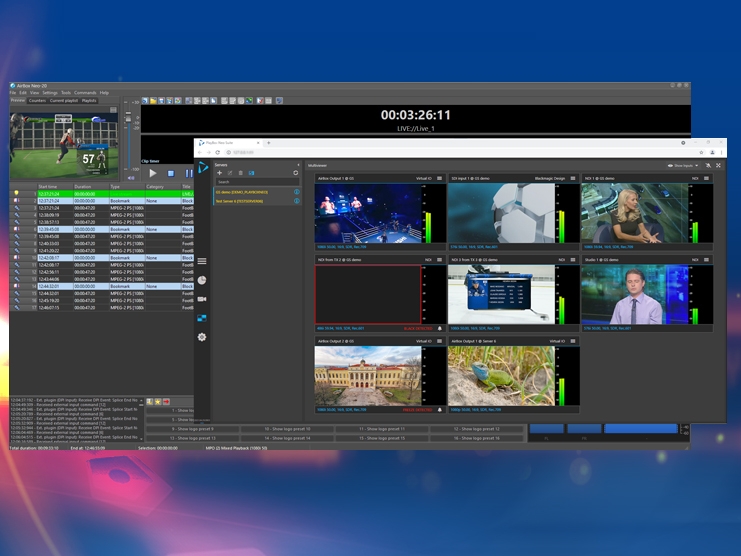 PlayBox Neo will exhibit the latest additions to its range of broadcast playout and channel branding solutions at CABSAT 2021, Dubai World Trade Centre, October 26th - 28th. Highlights of the demonstrations on stand B2-20 will be Capture Suite, AirBox Neo-20 and Cloud2TV.

Making its CABSAT debut, Capture Suite was developed for use within the UHD/HD/SD production workflow of television networks, post-production facilities and playout service-providers. It allows users to control multiple ingest channels across multiple servers from a single web user interface. Functions such as input selection, ingest presets, file-naming conventions, assignments and auto-transfer can be performed quickly and easily. Features include:

* Manual, Scheduled and Compliance ingest modes with automated input switching.
* Editing in Adobe Premiere and Grass Valley Edius Workgroup 9+ can now be performed while ingesting.
* MXF and TS files being ingested are available for immediate playout via AirBox Neo-20 automation without having to wait for the ingest process to complete.
* Loudness audio meters to allow precise audio level monitoring.
* A web-based multiviewer with black-frame and freeze-frame alarms.

Also new for CABSAT, the latest version of AirBox Neo-20 automated content streaming and broadcast playout system makes the creation and maintenance of single or multiple television channels easier than ever, including seamless workflow for local or remote control. It can be configured for round-the-clock automated operation on any scale from a regional station or corporate TV service up to a global network broadcasting to multiple timezones in multiple languages. Terrestrial, satellite, cable and IP-streamed transmission are all fully supported. Playlist scheduling can be performed weeks ahead of actual transmission while retaining the freedom to trim, edit or reschedule content or integrate with live production. Six new features have been introduced:

* Transport stream and XDCAM MXF file clips can now be played back while still being ingested, saving time as operators no longer need to wait until the ingest process is complete.
* GPU acceleration can be used to achieve fast file decoding, again saving time.
* Picture-in-picture digital video effects can be created within AirBox Neo-20.
* Real-time loudness compliance ensures the audio output level remains within a preset safe dynamic range to conform with national and/or international standards.
* Operators are alerted to absent or frozen video feeds via a web-based multiviewer, allowing service interruption to be checked and corrected quickly.
* Input/output configuration can be performed using a web-based resource monitor connected via a secure link.

PlayBox Neo will additionally be promoting its uniquely powerful Cloud2TV which can be configured for terrestrial, satellite or CDN-based playout under full IP control. Cloud2TV also forms a robust platform for secure media asset management and archiving, accessible by authorized personnel anywhere in the world. The PlayBox Neo broadcast product range and Cloud2TV can output in baseband SD, HD or UHD SDI, in DVB/ATSC-compliant streams and in web-based formats such as RTMP. Simulcasting of SDI and individual or multiple streams is also possible.

"Our products are built on 21 years of solid experience working with customers ranging in size from globally active broadcast networks to independent channel owners and playout service providers," says PlayBox Neo CEO Pavlin Rahnev. "That includes major players in the MENA market such as BHS, EutelSat, Gulsat, Nilesat and ViewMedia.

"We continue to lead the way in terms of product robustness, refinement, scalability and versatility. Central to that success is modularity, giving operators the ability to perform any or every function involved into television content preparation, from ingest transcoding, QC, graphic branding, text manipulation and scheduling right through to output transcoding and transmission.

"MENA broadcasters, like their colleagues around the world, are looking for maximum reliability and creative efficiency. Our CABSAT demonstration will show how straightforward PlayBox Neo systems are to install. The intuitive PlayBox Neo graphic interface also makes them very easy to operate. PlayBox Neo customers also expect, and get, absolute freedom to expand their systems as their business develops. There is no size limitation, from the day of installation right through the full lifetime of the system. We support every scale of operation from single channel to a large scale network, in SD, HD and UHD resolutions, with any desired level of auxiliary protection. Accommodating extra channels is a simple matter of adding one or more extra servers. MENA market broadcasters are supported during installation, training and post-sale by local distribution partners supplemented, if required, by fast online service.

"To put it simply, we invite all CABSAT visitors to come and see what has made PlayBox Neo the world leading producer of television playout and branding channels."