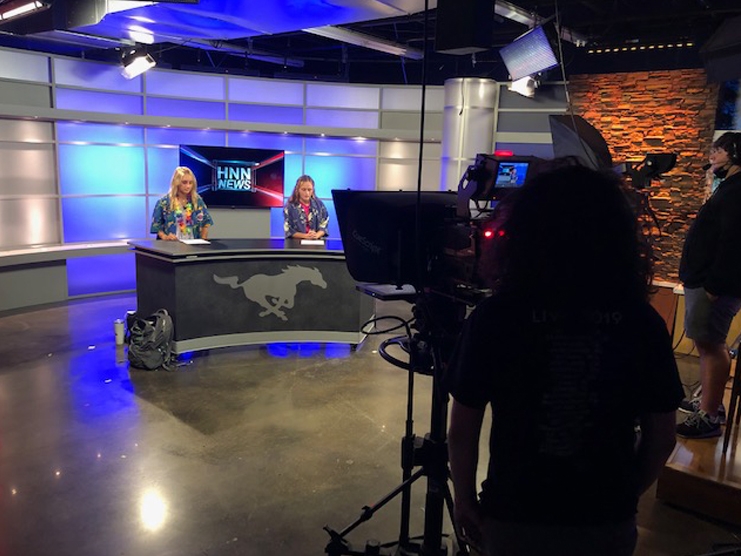 Viewers of Germantown Municipal Television (GMTV) in Germantown, Tennessee get to see a wealth of programming on this local PEG station, from daily newscasts and talk shows to local government meetings – broadcast in 1080p resolution. GMTV is cablecast on ATT&T U-Verse and Comcast within the city to 11,422 households.

While the quality of the video content is pristine, what’s less clear to the station’s audience is that behind GMTV’s studio cameras and control room gear are high school students. GMTV is a student-run station located on the campus of Houston High School in Germantown that operates like a broadcast network. Students in Houston High School’s “Film & Video” curriculum produce a daily news show, six talk shows every month, as well as live coverage of all town government meetings.

With a former broadcast veteran at the helm and a prevalence of cutting-edge technology at GMTV’s studio, it’s impossible to distinguish the operation from a local commercial station. “While our budget is not huge, no one can tell that from the quality of our broadcasts,” said GMTV Chief Engineer Rob Manuel. “We shop around extensively when it comes to the technology we use. We search for systems that are easy to learn, integrate well together, and provide the best output. And we keep everything upgraded as much as we’re able.”

The most recent upgrade was to GMTV’s playout system. Manuel installed the latest version of the PlayBox Neo-20 channel in a box server solution, which includes: Capture Suite live ingest, AirBox Neo-20 playout server, and TitleBox Neo-20 graphics generator. The new PlayBox Neo-20 system is compatible with Microsoft Windows 10 software, which was an upgrade high on Manual’s list.

“We were looking to integrate Windows 10 into our playout system,” added Manuel. “We’ve been with PlayBox Neo since 2008 and our last upgrade was in 2014 to a 480i SD playout system, so this was a top priority for me. We’ve been consistently happy with their products and service. The reliability and ease of use of PlayBox Neo technology is what I’m most impressed with. As a 24/7 local PEG station with a lot of live and originally produced programming, we don’t have time to worry about our equipment. PlayBox Neo gives us peace of mind. It just works.”

“We’re extremely proud to partner with GMTV,” said Van Duke, Director of U.S. Operations, PlayBox Neo. “It’s amazing to see what they’re producing with our system and how truly well done their programming is. I’m looking forward to seeing how they utilize the upgraded version, particularly with the graphics overlay they’ve added. It will rival any television network playout.”

GMTV was founded in 2014 by a partnership with the City of Germantown and the Germantown Municipal School District to provide public access and educational programming. All originally produced content is in 1080 HD on the station’s YouTube channel.

GMTV broadcasts all Board of Mayor & Aldermen, Board of Education meetings, Design Review Commission, Board of Zoning and Planning Commissions live from the City of Germantown council chamber. The Film & Video seniors can receive college credit through a dual enrollment program with the University of Memphis.

TitleBox Neo-20 allows infinite layers of high-quality graphic overlay to be created and manipulated during on-air.  Its capabilities include text selection with transitions, the creation of horizontal crawling text, vertically rolling credits and messages, still and animated logo graphics, clocks and countdowns, coming-up-next banners and the display of data coming in real time from sources such as live RSS feeds and social media.

Germantown Municipal Television is a Public-access Educational and Government (PEG) station that serves the city of Germantown, TN. GMTV is the source for everything Germantown. Watch our channel on Comcast channel 17 and AT&T U-verse channel 99 to learn valuable information about news and events that are happening in Germantown.