PlayBox Neo Hits the Road as Part of the NBT Media Tour, with Head of U.S. Operations Joining Texas Stops 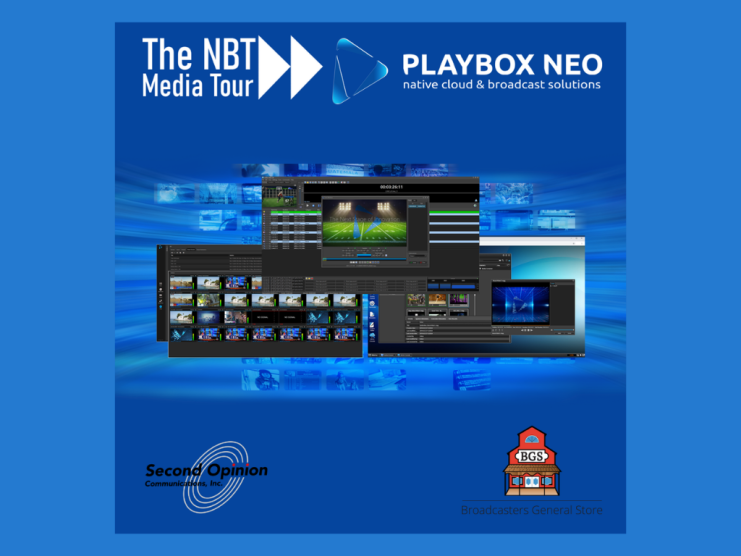 Van Duke, PlayBox Neo U.S. Director of Operations, will be on hand during the NBT Tour stops in Houston and Dallas. The tour stops at the Senior Road Tower Group on May 17 from 11am-2pm, 4110 McHard Road in Houston and will make local stops in its new mobile studio in Dallas on May 18. To request the NBT Tour visit your facility if they’re making a stop in your town, please click here.

The NBT is hosting 50 events this year in various locations throughout the U.S. locations, ranging from television stations to vendor facilities, to broadcast industry organization headquarters. The NBT tour began on May 9th in Albuquerque and was held at the New Mexico Broadcasters Association. The tour includes 50 dates in 48 cities throughout the U.S. The schedule with location details and registration is available here: https://nbttour.com/schedule/

The 2022 NBT TOUR features over 25 technology products for the broadcast, education and H.O.W. industries. In addition to PlayBox Neo, other companies participating in the NBT Tour include: Electro-Voice (Bosch U.S.), EditShare, Enco Systems, and Yellowtec.

“We’ve always believed in the power of showcasing our solutions live and in-person,” said Duke. “After three years of largely online interaction, we feel even more strongly that this is a crucial part of our approach. NAB was a big success for us in terms of connecting with existing customers and with potential new ones. We want to build on the momentum we established at NAB. With the experienced show hosts and complimentary brands on the tour, we’re confident the NBT Tour is exactly the way to do that.”

This is the third year of the NBT Media Tour, which began in 2020 with a schedule of 40 broadcast market visits. In 2021 the NBT TOUR grew to 70 broadcast markets, with several vendors taking part in the live events.

“PlayBox Neo is a leader in the next generation of playout solutions,” said Dave Kerstin, host of the NBT Media Tour. “They have the most flexible and reliable playout system we’ve seen. It keeps channels on-air in a seamless workflow that combines scheduling, ingest, playout, and CG - in one box. It can output in SDI or IP. We’re very eager to showcase the latest from PlayBox Neo to our attendees. I’m positive it will garner considerable attention.”

PlayBox Neo Channel-in-a-Box is a turnkey playout server solution for broadcasting a single or multiple TV channels in HD or UHD. It provides a seamless workflow to keep a channel on-air by combining scheduling, ingest, playout, CG and interactive graphics within one box and remote tools to enhance QC checks, preparation and monitoring. The output can be SDI or IP streaming and suitable for a variety of applications including traditional broadcast TV, pay-TV, playout centres, satellite operators, etc.

By leveraging on the SaaS in the cloud or traditional platforms on-premises, PlayBox Neo Channel-in-a-Box offers media ingest with Capture Suite, playout automation with AirBox Neo-20, interactive CG and graphics with TitleBox Neo-20 and scheduling with ListBox Neo-20.

On display at the NBT Tour, the new Multi Playout Manager (MPM) broadcast playout monitoring and control system allows multiple AirBox Neo-20 channels to be operated via IP from any network-connected location. Latest-generation enhancements include an updated user interface and integrated playout preview. The revised UI matches those across the entire PlayBox Neo series. MPM now includes a future-playlist editor, support for custom metadata from AirBox Neo-20 plus a library module for fast access to MAM.

PlayBox Neo's Capture Suite enables multiple ingest channels to be managed across multiple servers. Functions such as input selection, ingest presets, file-naming rules, assignments and auto-transfer can be performed from a single graphic interface. Features include: a multiviewer with black-frame and frozen-frame alarms plus loudness audio level monitoring, as well as manual, scheduled and compliance, ingest modes with automated input switching. Content can be edited before the completion of ingest.